The director of Hormozgan Province Ports and Maritime Organization stated: French corporations are interested in investment and cooperation with Iranian sides for developing infrastructural projects in Shahid Rjaeei port. 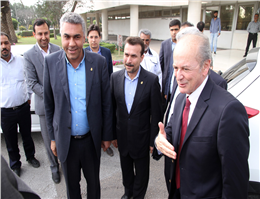 French ambassador to Tehran and his accompanying delegation paid a visit to Shahid Rajaeei port , MANA correspondent reported.
In a joint meeting which was held between French delegation and director of Hormozgan Province Ports and Maritime Organization and other senior authorities of this port, two sides discussed and exchanged idea over the relevant issues.
French delegation was also briefed on the existing potential and capabilities of Shahid Rajaeei port.
“We are so pleased to visit Shahid Rjaeei port as one of the most significant Iranian port”. Said French ambassador to Tehran.
Referring to that French and Iranian authorities are determined to develop political ties, Francois Senemaud further added: currently, the two countries have further deepened their ties in the fields of economic and industry, in addition, numerous projects are under in operation which will result in satisfying the benefits of the two sides.
Deeming being familiar with capabilities, investment advantages as well as plans and projects of Shahid Rjaeei port as the purpose of the trip, he remarked: economic patterns which have been used for the construction and development of infrastructures in this port are of great significance for us.
Pointing out to the long-standing political, economic and commercial ties between Iran and French, The director of Hormozgan Province Ports and Maritime Organization also remarked: Shahad Rajaeeei port enjoys many potentials for mutual cooperation with foreign corporations, it is hoped that in a new round for cooperation, the two sides could make the best out of the existing potentials.
0
Tags: france Shahid Rajaeei Port investment keen
Visit Home
Send to friends
Print
Newsletter
Share this news