<![endif]--> IRISL Ships Travel all Over the World

IRISL Ships Travel all Over the World

The First Deputy of Iranian president stated: thanks to the sanctions removal and the execution of JCPOA, Islamic Republic of Iran Shipping Lines (IRISL) faces no restrictions for international transportation and its ships could easily sail to each and every corner of the world while flying Iran's three-colored flag. 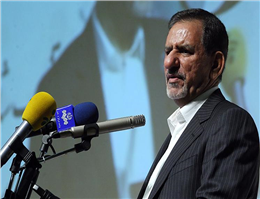 At the first anniversary of JCPOA execution, the First Deputy of Iranian president, Eshaq Jahangiri, pointed out that IRISL ships have managed to retrieve their position in international transportation and they are able to transport goods to the four corners of the world, MANA correspondent reported.
He further added: in the current year, exports and imports of Iranian goods have reached over 100 million tons.
Referring to that sanction imposers had targeted Iranian shipping lines, and intended to disrupt their routines by confining and pressuring international insurance clubs at the sanctions’ era , Jahangiri remarked: at the present time, major world shipping lines call at Bandar Abbas, Bushehr port and other Iranian ports.
0
Tags: IRISL Ships travel world
Visit Home
Send to friends
Print
Newsletter
Share this news