Switzerland - International organization for migration (IOM) reports that 1,159 migrants and refugees entered Europe by sea in 2017, through 12 January, arriving mostly in Greece and Italy, compared with 22,590 through the first 12 days of January, 2016. 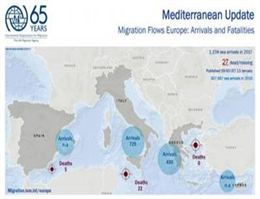 A year ago, IOM reported 22,322 migrants and refugees had landed on Greece’s islands after short runs from Turkey – a number consistent with the surge of Turkey-to-Europe passages that began the previous summer, MANA correspondent reported.
This year through 12 January, IOM Athens reports that only 430 migrants from Turkey have landed in Greece.
Arrivals in Italy, while also quite low, are running slightly ahead of 2016’s totals this winter. IOM Rome reports 729 migrant arrivals in Italy from North Africa in 2017, compared to 268 at this time last year. Deaths recorded at sea so far in 2017 total 27 –compared with 64 through the first 12 days of 2016.
0
Tags: Migrants Mediterranean Sea greece italy IOM
Visit Home
Send to friends
Print
Newsletter
Share this news