OPEC Cut No Knockout for Tankers

Credit Suisse analyst hits back at suggestions the tanker up-cycle is a thing of the past. 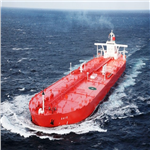 According to MANA, Credit Suisse has shot down a growing belief the tanker market up-cycle has reached the end of the road.
An influx of newbuildings at the same time as OPEC has turned down production quotas is widely expected to prove a drag on the market.
“The sharp drop in rates has resulted in tanker stocks pulling back 40-50% this year and expectations of lower rates in 2017 have some calling for the end of this cycle,” wrote analyst Greg Lewis in a report today.
“We disagree – we view 2017 as a pause in a longer up-cycle.”
The bank is charting for VLCC rates of $33,000 per day in 2017, down by 15% from last year and further from the $60,000 per day in 2015.
This comes amid what Lewis calls a “one two punch” from OPEC in the 1.2 million barrels per day it is cutting from the market.
While lower OPEC production is bad for tankers, Lewis also sees fleet growth as a “body blow” for the market.
“We expect a surge in 1H17 deliveries before falling off into 2018. While 2017 will see healthy fleet growth, a lack of ordering over the last year (down 80% Y-Y) should set the table for more manageable supply in 2018 and 2019,” the analyst explained.
Credit Suisse presently forecast VLCC rates to climb to $41,000 per day in 2018.
0
Tags: OPEC knockout
Visit Home
Send to friends
Print
Newsletter
Share this news