LIQUID hydrogen shipments from Australia to Japan could start in 2020 after representatives from the two countries signed a memorandum to allow the chemical element in liquid form to be shipped in bulk for the first time. 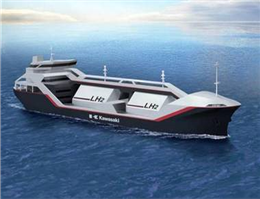 According to MANA, a statement from the Australian Maritime Safety Authority (AMSA) said the agreement was an important step forward in the Hydrogen Energy Supply Chain Project, allowing a pilot project to begin in 2020.
Japan’s Kawasaki Heavy Industries is building the pilot project’s liquid hydrogen carrier, which will be capable of carrying the volatile liquid safely by sea.
Currently, the carriage of liquefied hydrogen is prohibited under the International Code for the Construction and Equipment of Ships Carrying Liquefied Gasses in Bulk (IGC Code), which is a mandatory code under the SOLAS convention.
However, the carriage of liquid hydrogen is allowed if there is an agreement between the flag state of the ship and the ports of loading and unloading, and changes are developed to the code and taken to the International Maritime Organization for approval.
0
Visit Home
Send to friends
Print
Newsletter
Share this news