Iranian ports have witnessed a remarkable growth in the embarkation and disembarkation of goods, from April-December 2016. 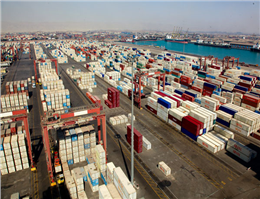 Based on the released statistics from Ports and Maritime Organization, Iranian ports have experienced the embarkation and disembarkation of 105 million and 904,940 tons of petroleum and non-petroleum goods in the first nine months of the current year.
In the statistics, the registered share of non-petroleum and petroleum goods was over 70 and 35 million respectively, MANA correspondent reported.
According to this report, From April-December 2016, over 3 million and 408,153 tons of goods have been transited from Iranian port, as well.
Moreover, in the mentioned period, 18 million and 454,942 tons of petroleum goods have been exported abroad, representing 76.2% rise.
0
Tags: Petroleum Goods PMO Announced Growth
Visit Home
Send to friends
Print
Newsletter
Share this news