The number of ships transiting the canal continued to drop in November last year, with 35 fewer vessels using the waterway compared with the same month a year earlier. 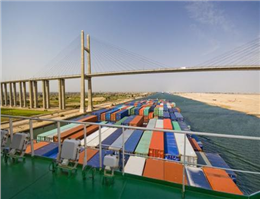 According to MANA, IHS Fairplay analysis of throughput data from the Suez Canal Authority (SCA) shows that from April to November inclusive, 707 fewer ships used the waterway compared with the same period last year, representing an average drop of 88 ships per month over the past nine months.
The low oil price is a key reason behind the low throughput on the strategic waterway.
The drop to 1,366 vessels in November, down from 1,401 in the month in 2015, was led by tankers and container ships.
Tanker traffic plunged by nearly 10% to 353 units, while container ship traffic fell by more than 5% to 416 units. The number of LNG ships that travelled the canal dropped by 8 to 44, while the number of bulkers rose 14% to 237.
Container ships followed by tankers and bulkers are the largest vessel groups to use the waterway.
The sluggish global trade environment is also contributing to the falling numbers. About 10% of all seaborne trade has traditionally passed through the canal, and its traffic levels have often been seen as a good barometer of global trade.
To offset the near-term revenue shortfall, the SCA has been in discussions with Maersk Line, CMA CGM, and MSC to secure advance lump sum payments for tolls in exchange for discounts.
The authority had hoped to implement this practice early this year but negotiations have not yet been completed.
In August 2015, Egypt opened an USD8.6 billion extension to the canal that opened up two-way traffic along the full length of the canal and reduced ships’ waiting times.
At the time of the opening, the SCA said the extension would support an increase in annual toll revenues to over USD13 billion per annum by 2023. But this figure has been questioned by analysts, some of whom said it would require a 10% annual increase in global trade from 2015 to 2023.
0
Tags: Suez traffic drop ship average
Visit Home
Send to friends
Print
Newsletter
Share this news