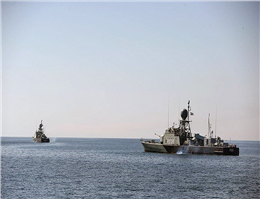 According to MANA, the Philippines has had strong ties with the U.S., but Duterte announced his "separation" from the United States in October last year, declaring he had realigned with China as the two agreed to resolve their South China Sea dispute through talks. Duterte has said that he wants to boost ties with China and Russia and has threatened to scale back U.S. troop presence in the country and joint exercises.

Rear Admiral Eduard Mikhailov, deputy commander of Russia's Pacific Fleet, leads the five-day visit. Mikhailov brought a range of equipment on the anti-submarine ship Admiral Tributs and the tanker Boris Butomato to demonstrate to the Philippine military.
The Philippines has struggled to deal with attacks by Abu Sayyaf terrorists who have kidnapped crewmen from ships and tugs in the region.

The nation has depended heavily on the U.S., its treaty ally, for weapons, ships and aircraft for years, although it has turned to other countries for defense equipment. After visiting Moscow last month, Defense Secretary Delfin Lorenzana said the Philippine military was considering purchasing drones and sniper rifles from Russia, reports ABC News.