The brand-new port of Gwadar, Pakistan holds great promise for its Chinese investors: it is handling millions of tonnes of supplies for the $50 billion China-Pakistan Economic Corridor (CPEC), and in future years it will host a 2,000 acre free trade zone, an oil terminal and an LNG export plant. 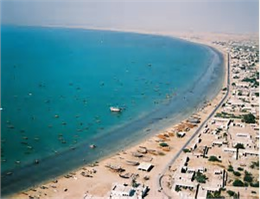 According to MANA, However, its developers will have to overcome one major hurdle in order to keep the port growing. Gwadar is in the middle of a desert, with average annual rainfall of 3.5 inches. With increased economic activity from the port's construction, Gwadar's population has increased by a factor of 20 over the past 15 years, and its water supply is under severe pressure.
The Pakistani government is attempting to address the problem through costly, energy-intensive desalination systems. A two million gallon per day desalination plant for Gwadar's new industrial zone was completed in 2015, after nearly a decade of delays.
Pakistani development officials blame the supply problem on a long-running insurgency in Balochistan: The completion of two new dams has been delayed for years due to a series of kidnappings, but now that the Pakistani government has assigned a special security force for CPEC projects, authorities say that these new reservoirs could be ready as early as 2018.
0
Tags: Gwadar Port Water Shortage
Visit Home
Send to friends
Print
Newsletter
Share this news