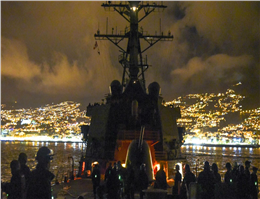 Shifting the current target of 308 ships upwards would be "remarkably easy" as long as there is funding to pay the bill, the top uniformed Navy official said in an interview, MANA correspondent reported.
"If it's resourced, it's a matter of working closely with the industrial base, and they definitely are ready to do that," he said, adding the only limiting factor would be hiring and training workers to build the new ships.
"If I do not have that capacity, I can create it faster than you can appropriate the money," Mike Petters, chief executive of Huntington Ingalls Industries, the largest U.S. military shipbuilder, said in a separate interview.
Trump promised during his U.S. election campaign to expand the Navy to 350 ships, although lawmakers and military officials caution that any such boost would require big increases in staffing, training, maintenance and infrastructure.
A supplemental budget request could include munitions, aircraft and other equipment that can be bought on short notice, followed by later orders for submarines, destroyers, amphibious ships and potentially even carriers, Richardson said.
0
Tags: U.S. navy fleet Trump submarine
Visit Home
Send to friends
Print
Newsletter
Share this news