The director of Hormozgan Ports and Maritime Organization announced : in the first eight months of this year, Shahid Rajaeei Port has witnessed a five-percent rise in docking over 1000-ton vessels. 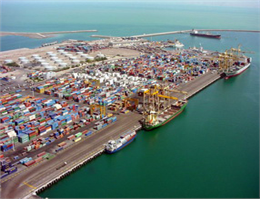 Submitting a report on the performance of Shahid Rajaeei Port, allah morad afifipour remarked: in the first eight months of this year, 51.107.223 tons of petroleum and non-petroleum goods have been embarked and disembarked in the largest Iranian commercial port.

this official figure also stated: in Shahid Rajaeeei port, the volume of non- petroleum goods reached 22.312.680 tons , which this figure highlights a 44-percent increase in comparison with the same period in the last year.
The director of Hormozgan Ports and Maritime Organization added: in the mentioned period, this port has experienced a 40-percent ascent in petroleum derivative exports.
morad afifipour asserted: in the first eight months of this year, the biggest Iranian commercial port has seen the embarkation and disembarkation of 1.403.977 TEU, which this figure indicates a 29-percent rise in comparison with the similar period in the last year.
0
Tags: Shahid Rajaeei Port rise dockers
Visit Home
Send to friends
Print
Newsletter
Share this news