Some 1,400 boat migrants trying to cross the Mediterranean from North Africa to Europe were rescued on Tuesday, Italy's coastguard said, after at least 11 overcrowded boats set out from Libya amid calm seas. 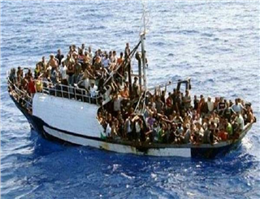 According to MANA, Rescuers have also recovered eight dead bodies.
Italy's coastguard coordinated the rescues off the Libya coast, including helicopter airlifts of three migrants in need of immediate hospital care, a spokeswoman said.
The rescue ship Vos Hestia, run by the international charity Save the Children, was among those involved in the rescues. It picked up more than 400 people from a wooden boat during the night, according to the organization's Twitter account.
The death toll in the Mediterranean - the most dangerous border crossing on the planet for migrants - is estimated to be 4,655 this year, 1,000 more than in all of 2015, according to the International Organization for Migration.
0
Tags: Migrants italy rescue
Visit Home
Send to friends
Print
Newsletter
Share this news