At the start of October 2016, a set of revised criteria was introduced for China’s White List of domestic shipyards, marking a further indication that the industry in China is likely to continue to downsize, according to Clarksons Research. 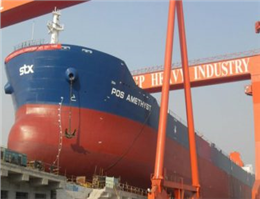 Under the new criteria, builders can be dropped from the list if they suspend production or declare bankruptcy, merge with or be acquired by other yards, fail to win a new order and deliver a vessel over a two year period, or fail to deliver a ship, receive a contract, and have no units under construction over a one year period, MANA correspondent reported.
Based on the current status of the yards in relation to the new criteria, of the 71 yards on the White List, seven are in financial distress and have declared bankruptcy.
Many yards expanded rapidly during the boom years, but in the following downturn, cost overruns and output delays have been apparent. These yards have been particularly vulnerable, and have suffered from dwindling cash reserves.
Although state-owned yards have not been affected to the same extent, they have not been immune to the very difficult market conditions.
Taking into account the yards which have declared bankruptcy and merged with others, the White List will shorten to 59 yards.
While these builders currently meet the revised criteria, some may soon receive a warning for failing to secure new orders as 40 of these yards have not won an order in 2016 so far, 18 of which also did not receive an order in 2015. Most yards still have ships under construction, but four builders have not delivered a unit since the start of 2015.
0
Tags: White List Shipbuilding china crisis
Visit Home
Send to friends
Print
Newsletter
Share this news