OCEAN Alliance members on Thursday came together to sign a document detailing its planned service coverage in the market. 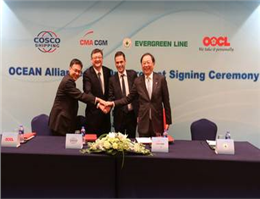