nited Nations Secretary-General Ban Ki moon has welcomed the steps agreed upon today by the members of the International Maritime Organization (IMO) to address greenhouse gas emissions from international shipping. 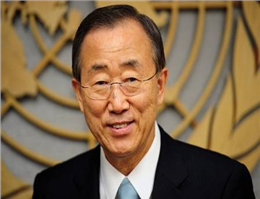 According to MANA, According to a statement issued by Mr. Ban's spokesperson, the steps include: efforts to limit sulphur emissions; a mandatory data system for fuel consumption; strengthened implementation of energy-efficiency regulations.
“Welcoming these important steps, the Secretary-General calls for urgent and ambitious action to limit the greenhouse gas emissions from global shipping [which] are projected to rise significantly given the critical role that shipping plays in the global economy,” said the statement.
Further to the statement, Mr. Ban called on IMO members, in partnership with the maritime industry, to promote further progress on the reduction of greenhouse gas emissions from ships to contribute to the objective of the Paris Agreement on climate change, which enters into force on 4 November 2016.