South Korea’s Incheon port has posted container throughput of 670,000 teu in the third quarter, an increase of 12.1% from 600,000 teu seen in the same period of 2015, according to data from Incheon Port Authority (IPA). 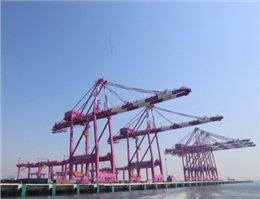 According to MANA, the majority of container trade was contributed by China, which accounted for 392,951 teu for the July-September 2016 period, increasing by 8.3% compared to the previous corresponding period, while Vietnam accounted for 64,932 teu, up 33.3%.
“Such shipment increases are likely to be a result of the volume rising due to the effect of the Korea-China FTA and Korea-Vietnam FTA that took effect last year,” IPA stated.
“In particular, the container shipment to Iran is continuously increasing from 1,354 teu in July, 2,297 teu in August and 2,414 teu in September due to a regular container service connecting Incheon port to the Middle East, which was launched in June,” it added.
Elsewhere, shipment related to Europe dropped 28% year-on-year to 7,933 teu during the third quarter due to the rapid decrease in timber imports from Romania.
From January to September this year, Incheon port moved a total throughput of 1.91m teu.
0
Tags: south korea throughput Incheon Container Volume
Visit Home
Send to friends
Print
Newsletter
Share this news