OUL— Hyundai Merchant Marine Co. and four other shipping groups submitted preliminary bids for the assets of Hanjin Shipping Co.’s Asia-U.S. route, as Hanjin is broken up as part of a restructuring plan. 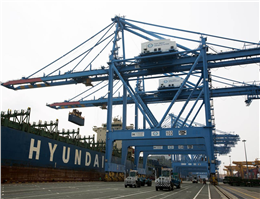 According to MANA, The five bidders now have until Nov. 4 to review the assets, which include the vessels that operate on the trans-Pacific route.
“We hope Hanjin assets will help enhance our competitiveness on major routes,” Hyundai Merchant, a major South Korean shipping line, said. It said it would decide whether to make a final takeover proposal after it completes due diligence.
A judge at the Seoul Central District Court, which is handling Hanjin’s insolvency proceedings, confirmed the five bids, but declined to identify the bidders.
Samil PricewaterhouseCoopers, which is managing the asset sale, said it would accept final bids until Nov. 7, with a view to signing a sale agreement by the middle of the month.
The nine ships, worth around $90 million each, are among the best in the Hanjin fleet, and their loss is a strong indication that the company won't return to its former status as a global carrier.
0
Tags: Hyundai Merchant Marine Hanjin
Visit Home
Send to friends
Print
Newsletter
Share this news