Minister of Infrastructure and the Environment of the Netherlands, Melanie Schultz van Haegen accompanied by a high-ranking delegation and port activists paid a visit to various parts of Shahid Rajaeei Port. 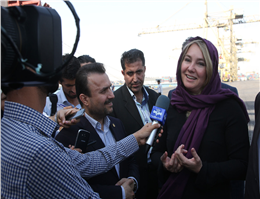 According to MANA, Minister of Infrastructure and the Environment of the Netherlands, Melanie Schultz van Haegen accompanied by a 25-member delegation of maritime and economic activists as well as the manager of Rotterdam Port, paid a visit to Shahid Rajaeei Port and its facilities and capabilities.
In a joint meeting, Dutch delegation discussed and exchanged idea with the senior officials of Shahid Rajaeei Port .
In order to explore joint cooperation grounds , Dutch delegation also was briefed on the existing potentials of Shahid Rajaeei Port.
Deputy of ports affairs and Hormozgan province ports and maritime organization , Mohammad Ali Asl Saeedi Pour also offered a comprehensive report of Shahid Rajaeei Port’s capabilities and capacities as well as its latest operational achievements.
Expressing his gratitude for hospitality of Hormozgan province authorities, Melanie Schultz van Haegen remarked: visiting Shahid Rajaeei Port as the Iranian most paramount commercial , was one of the main reason for travelling to Hormozgan Province.
Asserting that there are various grounds for joint cooperation including dredging operations, port development and shipping, She further added: at the present, the grounds have been paved for reviving trade relationship between Iran and Dutch like before the sanctions –era.
0
Tags: Shahid Rajaeei Port Minister of Infrastructure and the Environment of the Netherlands,
Visit Home
Send to friends
Print
Newsletter
Share this news