<![endif]--> Hyundai Heavy back to profit in third quarter

Hyundai Heavy back to profit in third quarter

Korea’s Hyundai Heavy Industries (HHI) has returned to profit in the third quarter despite a drop in revenue. 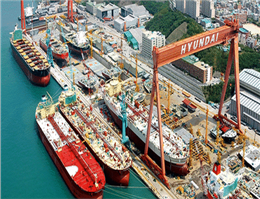 According to MANA, The shipbuilder said net earnings to 30 September were KRW 295.5bn, from a loss of KRW 600bn in the same three months of last year.
Analysts’ estimates were for profit of KRW 213.8bn.
Offshore operations logged a profit after costs were cut. In 2015, HHI blamed blamed offshore plant construction delays for the red ink.
But it admitted there is an “extreme drought” of new contracts and it expects a tough time in 2017.
0
Tags: Hyundai Heavy profit
Visit Home
Send to friends
Print
Newsletter
Share this news