COPENHAGEN, Oct 25 Egypt is in talks with global shipping firms to change the way it charges vessels to pass through the Suez Canal. 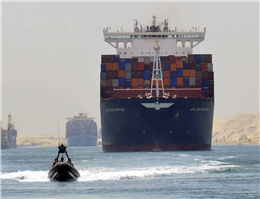 According to MANA, Denmark's A.P. Moller-Maersk, which runs the world's biggest container shipping line, said on Tuesday it was considering proposals from the Suez Canal Authority for a new toll system.
"They have proposed a new payment method and presented it to us, and we are looking at it now," a spokesman for its Maersk Line shipping arm said, confirming a newspaper report and that advance payments were under discussion.
The Suez Canal is one of the main sources of foreign currency for a country that has struggled to overcome a crippling dollar shortage since an uprising in 2011 caused an exodus of foreign investors and tourists.
Egypt aims to double its revenue from the Canal by 2023 with the construction of an extension to the waterway that was completed this year.
Mamish told the newspaper on Tuesday that talks with Maersk, Geneva-based Mediterranean Shipping Co. and France's CMA CGM were going well, and that an agreement on a new system for the start of 2017 might be reached as early as next week.
Egyptian President Abdel Fattah al-Sisi inaugurated an $8 billion expansion of the Suez Canal in August 2015 with a view to doubling daily traffic and increasing annual revenue to more than $13 billion by 2023.
0
Tags: Suez Canal Egypt toll
Visit Home
Send to friends
Print
Newsletter
Share this news