The Panama Canal Authority (ACP) and UK ports operator Peel Ports, the owner of the Port of Liverpool, have entered into a Memorandum of Understanding (MOU) ahead of the formal opening of the Liverpool2 container terminal in early November. 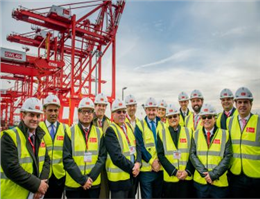 Signed on October 24, the formal agreement creates a strategic alliance aimed at facilitating international trade and generating new business by promoting trade routes between Liverpool and the west coast of South America via the Panama Canal, MANA correspondent reported.
“Liverpool and Panama have both responded to the growth of the global container ship fleet with major investment programmes in recent years to accommodate newer generations of container ships,” Mark Whitworth, Chief Executive of Peel Ports Group, said.
The agreement follows a number of investments by the Panama Canal Authority to expand its lock gates and unlock the potential for a new generation of Neo-Panamax vessels, as well as the development of Liverpool2, which provides an opportunity for the Port of Liverpool “to develop its role as a destination for these larger vessels,” according to UK’s Panama Ambassador, Ian Collard.
“Today is the start of what I hope will be a new chapter in Liverpool-Panama relations,” Collard said.
0
Tags: Panama neo-panamax Container Fleet
Visit Home
Send to friends
Print
Newsletter
Share this news