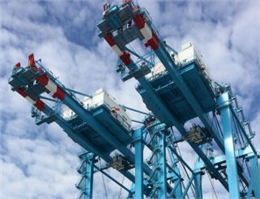 According to MANA, Under the contract, the terminal operator ordered a total of 12 remote-controlled Ship-to-Shore (STS) cranes and 32 Automated Rail-Mounted Gantry Cranes (ARMGs) for the five-million TEU APM Terminals MedPort Tangier facility.
The STS cranes, ordered from Shanghai-based ZPMC, are scheduled for delivery at the end of 2017 and feature full automation, including a remote crane operator safely located in an office building near the quay, a second trolley, and Optical Character Recognition (OCR) technology.
The 32 ARMGs, also expected for delivery in late 2017, will be provided by Austrian-based Künz and deployed in 16 container yard blocks, each serviced by two ARMGs.
APM Terminals MedPort Tangier will have up to 2,000 meters of quay length and increase the Tanger-Med complex’s overall capacity to over nine million TEUs.
Total investment in the new terminal is expected to be EUR 758 million, with APMT’s sister liner company Maersk Line to be an important customer of the new terminal.