Hanjin in Talks to Sell Stake in Long Beach Terminal

Korea’s Hanjin Shipping Co. is in talks with Swiss shipping giant Mediterranean Shipping Co. to sell its stake in the Long Beach Terminal as part of a plan to dispose most of its oversees assets after filing for bankruptcy protection in August, people involved in the matter said Friday. 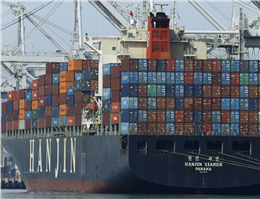 The talks involve Hanjin’s 54% stake in Total Terminals International LLC, which runs Long Beach Terminal in California. MSC owns the remaining 46%.
The Wall Street Journal reported last week that Hanjin, has reached out to European shipping majors and Korean peer Hyundai Merchant Marine Co. to sell assets, including five, 13,000 container ships, as part of a restructuring plan that will see it emerge as a small, intra-Asia operator.

People involved in the process said Hyundai will be first in line to cherry-pick on Hanjin’s ships, which include five 13,000-container vessels. Both the Korean government and Hanjin’s main creditor, Korea Development Bank, have said they would back HMM in buying Hanjin assets, provided such a move would help it stay competitive. KDB is also HMM’s main creditor.
HMM is looking to secure Hanjin’s slice of moving Korea’s exports to Western markets, but would need more capacity to achieve it and keep bigger competitors like MSC and Denmark’s Maersk Line from winning major shipping contacts from electronics behemoths like Samsung Electronics Co. and LG Electronics Corp.
Before filing for bankruptcy protection, Hanjin was the world’s seventh largest operator in terms of capacity. The restructuring plan must be approved by a bankruptcy court in Seoul, and if rejected, Hanjin will be liquidated.
At the end of the second quarter, Hanjin had total debts of $4.2 billion.
The Long Beach Terminal has the capacity to handle 3 million containers a year and fit to serve midsize container ships with a capacity to move around 10,000 containers.
The bankruptcy court handling Hanjin’s insolvency proceedings has said it plans to dispose of the firm’s sales and marketing network for is Asia-U.S. route as well as some ships. Hanjin said it would receive letters of interest by Oct 28. and binding bids by Nov. 7.
The port of Long Beach said earlier this month that container volumes in September fell 16.6% from a year ago, as the effects of the Hanjin bankruptcy reached West Coast ports. Hanjin Shipping accounted for about 12.3% of the port’s total containerized volume.
Beyond the five 13,000-container vessels, the remaining of Hanjin’s 37-ship fleet are mostly Panamaxes, which carry fewer than 10,000 containers. Such vessels are becoming obsolete in the wake of the widening of the Panama Canal earlier this year. That expansion allows ships moving 12,000 containers or more to pass through the isthmus.
0
Tags: Hanjin Long Beach Terminal stake
Visit Home
Send to friends
Print
Newsletter
Share this news