THE Port of Antwerp recorded a 3.3% increase in the freight volume it handled in the first nine months of 2016 as containers and liquid bulk gains offset losses in dry bulk. 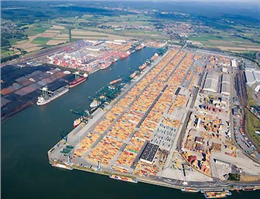 According to MANA, Total freight volumes rose to 161.67m tonnes between January and September 2016 at the Belgian port, with container activity accounting for the majority of the traffic.
The port also recorded a 4% increase in container throughput, having handled over 7.5m teu. The increase continued Antwerp’s strong performance in container handling, following a 7.5% increase in throughput from 2014 to 2015.
Liquid bulk volumes rose by 6.7% to 53.1m tonnes and oil derivatives jumped by 10.3% to 38.99m tones.
While the port handled more of these vessels, dry bulk activity fell by 11.6% compared with the first nine months of 2015, standing at 9.26m tonnes at the end of September. A 16.9% decline in ores as well as a 20.1% reduction in sand and gravel accounted for most of these losses.
0
Tags: Antwerp port
Visit Home
Send to friends
Print
Newsletter
Share this news