COPENHAGEN, Oct 17 Shipping conglomerate A.P. Moller-Maersk said on Monday it was striving to improve workers' rights at shipbreaking yards it uses in India after criticisms of hazardous conditions. 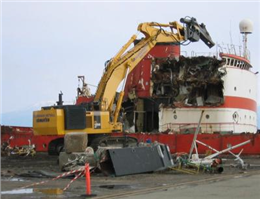 The Danish company also expressed regret that a ship it sold this year, the "North Sea Producer", had then been taken to a shipbreaking yard in Bangladesh, after Danish media last week showed workers using precarious rope ladders to climb the hull.
Most shipping companies send old ships to shipbreaking yards in India, Bangladesh or Pakistan because they will dismantle container ships almost as long as three soccer pitches at relatively cheap prices.
Maersk Line, the world's biggest container shipper, sent two of its vessels for decommissioning this summer to the Shree Ram yard in Alang on India's west coast.
"We have established a cooperation with Shree Ram and brought our ships to Shree Ram yard 78, knowing that the standards were not yet at the level of our standards," Maersk spokesman Simon Mehl Augustesen said.
"We consider our active presence in Shree Ram and Alang to improve conditions faster and more effectively, than waiting for our standards to be complied with," he said.
Shree Ram says that it safeguards workers' rights.
But a lack of employment contracts and toxic fumes were among findings by the Danish media watchdog Danwatch and two Danish media outlets, TV 2 and Politiken, in a collaborative report documenting conditions for Indian workers at the shipbreaking yard.
"Maersk has a decent set of safety rules for this kind of work, which it says are being followed in India, but when you see how it actually works, they don't abide by them," said Peter Hasle, a professor at Alborg University in Denmark and a specialist in occupational health and safety.
He cited exposed gas cables, poor ventilation and a lack of safety equipment at Shree Ram as examples of non-compliance.
ALSO IN ENERGY
Danish politicians criticised Maersk on Sunday, saying the company should monitor what happens to its ships more closely.
An average of 1,000 ships are demolished each year globally, and more than 70 percent end up in South Asia, according to the NGO Shipbreaking Platform.
0
Tags: maersk shipbreaking yard india
Visit Home
Send to friends
Print
Newsletter
Share this news