A ferry sank in a river in northwestern Myanmar, killing at least 14 people with scores missing, a rescue official said on Monday. 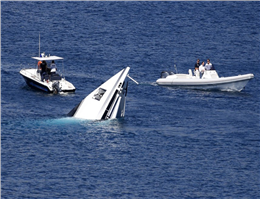 According to MANA, About 150 people had been rescued from the Chindwin river in the Sagaing region after the ferry capsized on Saturday, said Sa Willy Frank, head of the regional relief department.
“We’ve just found the exact location of the sunken boat and now we're trying to salvage it using heavy-duty cranes,” Sa Willy Frank told Reuters.
"A total of 14 bodies have been found and 85 are still missing."
Kyaw Htay Lwin, a lawmaker in the Sagaing regional parliament, said the number of missing could be higher.
"I heard from witnesses that the boat was packed with at least 300 passengers, despite its official capacity of around 120,” he said.
The ferry was traveling from Homalin to Monywa when it sank at about 5 a.m. on Saturday close to Kani, about 85 miles (137 km) northwest of Myanmar's former royal capital, Mandalay.
0
Tags: ferry Myanmar
Visit Home
Send to friends
Print
Newsletter
Share this news