<![endif]--> India to Collaborate with Germany for Projects in Ports

India to Collaborate with Germany for Projects in Ports

Indian Minister of Road Transport & Highways and Shipping Nitin Gadkari has said that India and Germany are all set to collaborate on projects for improving rail connectivity of Indian ports. 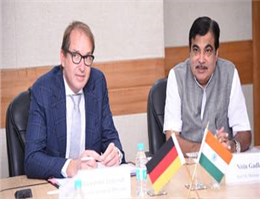 According to MANA, He said the two countries will work together on projects worth Rs one lakh crore being implemented by the Indian Port Rail Corporation Ltd (IPRCL).
The Minister held detailed discussions with his German counterpart and Infrastructure Minister Alexander Dobrindt and his delegation in New Delhi today, regarding the modalities for such collaboration.
For efficient evacuation of cargo from the Ports and to reduce logistics cost, last mile rail connectivity of Ports is extremely important. Indian port Rail Corporation Ltd. has been set up specifically to work in this area.
It was proposed in the meeting to form groups with representatives of IPRCL and DB to identify areas of cooperation and potential projects, as also to identify cost effective new rail technologies that can be implemented.
Gadkari further informed that Germany has also been invited to cooperate in the development of inland waterways, including manufacturing of barges.
In the transport sector, discussions were held on cooperation for developing vehicle scrapping capacity in India. India has invited Germany to share environment friendly technology for scrapping of old vehicles and also for processing of the waste thus generated.
0
Tags: india German rail connectivity port
Visit Home
Send to friends
Print
Newsletter
Share this news