US west coast ports experienced lower container volumes is September due to Hanjin Shipping’s’ bankruptcy, with Long Beach box traffic down 16.6% and Oakland reporting a 5% drop compared with a year earlier. 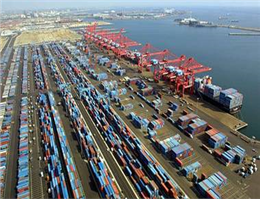 According to MANA, Long Beach moved 546,805 teu last month, with imports declining 15% to 282,945 teu and exports dropping 4.2% to 120,383 teu.
Oakland handled 187,540 teu in September. Containerised export volumes rose 10% to 76,356 teu while import cargo volume dropped 4.2% to 70,307 teu compared with a year ago. However, the export of empty containers slumped 40% in September.
For the first nine months of 2016, Long Beach cargo volumes were down 4.6% while Oakland had a 3.5% increase.
Long Beach officials said the reduced calls by Hanjin-operated ships together with the absence of Hanjin containers on vessels operated by other CKYHE alliance members reduced the number of containers handled during September.
Hanjin Shipping’s containers accounted for more than 12% of Long Beach’s total containerised volume before the company's collapse.
Meanwhile, the Marine Exchange of Southern California reported that the 8,500 teu Hanjin Seattle is due to arrive in Long Beach on October 18 and moor at berth T-136 at Total Terminals International to discharge containers.