<![endif]--> Panama calls international tender for the Port of Corozal

Panama calls international tender for the Port of Corozal

The Panama Canal has published the tender files for the concession, design, construction, development and operation of a container port in the area of West Corozal on the east bank of the waterway Pacific entrance. 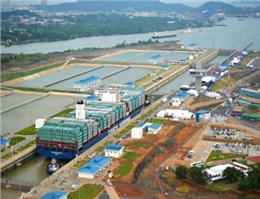 The four pre-qualified companies have until 3 February, 2017 to submit their financial proposals in compliance with the tender requirements to compete for the 20-year concession, MANA correspondent reported.
After a process in which it received proposals from seven international companies, the Panama Canal announced last April that four firms had been prequalified to participate in the bidding for the Corozal box terminal.
The four port operators are: APM Terminals (Holland); Terminal Link (France); PSA International (Singapore), and Terminal Investment Limited (Holland).
The development of a container port in Corozal West is part of the Panama Canal strategy of business diversification in order to maintain their competitiveness and increase their contributions to the country, the ACP said in a statement.
The 5.3m teu-terminal will be developed in two phases: the first phase for the construction and operation of the 3.2m teu-terminal with 1,350 m of quay and 66 hectare-yard area. The second phase will cover 56ha and increase capacity by 2.1m teu.
Corozal West Terminal will be developed under a model of "green port" with environmentally friendly standards to minimise impacts on the community and provide solutions to transportation issues, noise and air pollution.
After the Panama Canal Board of Directors authorised the Panama Canal Authority (ACP) to proceed with the bidding process, the document is available on the official site: www.micanaldepanama.com
0
Tags: panama canal PSA port port operator
Visit Home
Send to friends
Print
Newsletter
Share this news