Japan's Mitsubishi Heavy Industries is planning to stop taking new orders for large passenger ships, downsizing its shipbuilding operations due to a slump in orders, the Nikkei newspaper reported on Sunday. 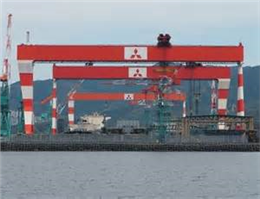 According to MANA, The plans by Japan's fourth-largest shipbuilder come as new shipbuilding orders have declined 80 percent so far this year, the Nikkei said. Citing unidentified sources, it said the company was considering splitting off its planning and design division and sharing shipyards with other companies.
A spokesman for Mitsubishi Heavy, which also builds aircraft and defence equipment, said the report was not based on information provided by the company and declined further comment.
Mitsubishi Heavy took a 103.9 billion yen ($1.01 billion) loss on its cruise ship construction operations in the year ended March, having delayed the delivery of a cruise ship produced for Carnival Corp by more than a year.
The Nikkei said Mitsubishi Heavy was planning to reduce risks in its shipbuilding operations by focussing on building smaller ships, which have simpler specifications.
0
Tags: Mitsubishi
Visit Home
Send to friends
Print
Newsletter
Share this news