Shipping Shipping
A
News ID: 69424 |
In The List of Container Shipping Companies Ranking:

After four years of dealing with the financial crisis and decline in liquidity up to 56 percent this year, South Korean shipping company, filed for bankruptcy in August in which it collapsed eight steps in the world ranking of container shipping companies and stood in 16th place. 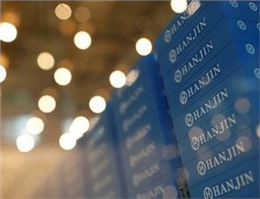 Following inconclusive talks with leasing companies, vessel operators and owners to reduce charter rates, lack of support from the Korea Development Bank, huge debts and cancelled cooperation of CMA CGM in five South Korea's largest shipping lines, Hanjin filed for bankruptcy and made the global trade to face with challenges, MANA correspondent reported.
Accordingly, the Hanjin with a fleet of 98 container ships and the capacity of 616,660 TEU decided to sell its vessels and assets to the extent that it fell eight steps in world ranking. At the time, it has 48 vessels with the capacity of 350,202 TEU and it stands in the 16th place.
The report continued: After a month of wandering of the container vessels in the harbor of the world, financial assistance from the company's largest shareholder, Korean Airlines, its largest creditor, Korea Development Bank and director of the company areas provided the feasibility of unloading container ships.
Meanwhile, Cosco Chinese shipping company said in a statement that it may buy the assets of the company including terminals and logistic units. Moreover, the possibility of berthing and unloading of cargo at ports in Germany, America, Canada, Japan and Singapore has been provided.
It's worth mentioning that South Korea's Hyundai Merchant announced that despite the crisis in our financial budget we plan to buy five container ships from Hanjin (by $90 m for each) with a total capacity of 13 thousand TEU.
0
Tags: Hanjin CMA CGM south korea bankruptcy
Visit Home
Send to friends
Print
Newsletter
Share this news