New Zealand’s government has welcomed the arrival of the Aotea Maersk in Tauranga, the biggest container ship to have ever visited this country. 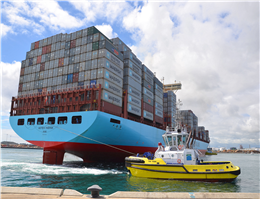 According to MANA, The 9,500 TEU vessel can carry almost twice as much cargo as any other container ship that has previously docked in New Zealand, according to the country’s Transport Minister Simon Bridges.
The vessel arrived in Tauranga as part of Maersk Line’s Triple Star service, which connects North East Asian ports and New Zealand.
“It will serve a new line between China, New Zealand and Chile, opening up new economic opportunities in Latin America. It will also offer a fast weekly direct service to important markets including China, Korea, Japan and Taiwan,” minister Bridges said.
Earlier this year, the Port of Tauranga revealed it expects to handle over one million TEUs in the year ended June 2017, following an upgrade which will allow larger ships to call at this port