Depression in the containership market has led to a sharp fall in the age of boxships heading to the scrap heap. 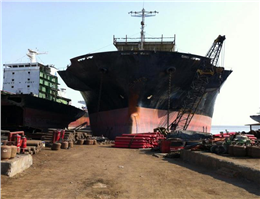 According to MANA,In the three months from the start of July the average age of containerships sent to the beaches has slumped to 16, data provided to TradeWinds shows.
This marks a decline from 19.7 years of age in the previous three months and 20.2 years in the opening quarter of 2016, the figures show.
As TradeWinds reported in September the 4,546-teu Viktoria Wulff (built 2006) became the first 10-year-old vessel without accident damage to head for scrap in more than 30 years.
Panamax market has been particularly hard hit and today 564 of the 840 panamax boxships in the world are at or below demolition value, VesselsValue calculates.