The wreck of a boxship that capsized off Italy last month has been taken under tow to avoid it grounding. 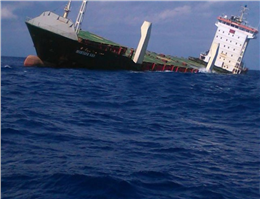 According to MANA, The 751-teu Mustafa Kan (built 2009) was reported to have sunk after capsizing off Syracuse, but it has remained afloat, posing a potential threat to the coast.
A Greek tug has attached a line to the ship and is taking it to Cyprus, Italian media said.
It is being escorted by naval vessels and anti-pollution boats.
No pollution has been reported.
The ship suffered a leak in its engine room on 23 September.
It was carrying 8,000 tons of ammonium phosphate from Dakar to Sibenik in Croatia.
All the crew were rescued.
0
Tags: Capsized boxship tow
Visit Home
Send to friends
Print
Newsletter
Share this news