<![endif]--> The First Iran-Oman Maritime Passenger line to be Launched

The First Iran-Oman Maritime Passenger line to be Launched

The director of Hormozgan Province Cultural heritage, Handicraft and Tourism announced that the first Iran-Oman maritime passenger line to be launched from August 7th 2016. 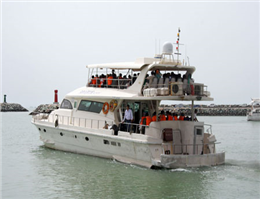 In an interview with MANA reporter, Mohsen Zaiyee remarked: in the light of negotiations with Omani authorities regarding the development of maritime travels and increasing the number of tourists from both countries as well as holding several sessions, the first Iran-Oman maritime passenger line will commence its activities since August 7th 2016.
The director of Hormozgan Province Cultural heritage, Handicraft and Tourism stated: in the mentioned data, an Omani vessel carrying tourists will be entered in Bandar Abbas from Khasab.
This official figure announced that it will take 2 hours until the vessel reach Bandar Abbas from Khasab and emphasized: period of stay depends on the Omani Tourists and there is no limitation in this regard.
Mohsen Zaiyee also hoped: with the launching of this passenger line, we would be witnessing a boom in maritime travel in Persian Gulf region as well as the development in maritime tourism sector.
0
Visit Home
Send to friends
Print
Newsletter
Share this news