The governor general of the Russian Province of Astarakhan announced that establishing a maritime passenger line between Nowshahr and Astarakhan is potential, given that the necessary and ample infrastructures for passenger section are available in Nowshahr Port. 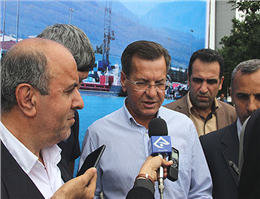 In a meeting with Siavash Rezvani, MANA reported, Alexander Zhilkin demanded that the export of agricultural products from Nowshahr Airport to Russia increase. He added that Astarakhan is an appropriate market for agricultural products, flowers and plants, and he expressed his province was interested in supplying their needs from Mazandaran Province from Nowshahr Port.
He further stated that he had conducted some negotiations with Mazandaran governor general regarding promoting maritime tourism, and given the availability of the necessary infrastructures for passenger section in Nowshahr Port, the establishment of a maritime passenger line between Nowshahr and Astarakhan is potential.
It should be noted that the governor general of Astarakhan, Alexander Zhilkin, accompanied by a Russian delegation and Dr. Kheirianpour, the economic coordination and resource promotion deputy of Mazandaran Province, visited different parts of Nowshahr Port Special Economic Zone, and was briefed on the capacities, potentials and abilities of this port.
0
Visit Home
Send to friends
Print
Newsletter
Share this news