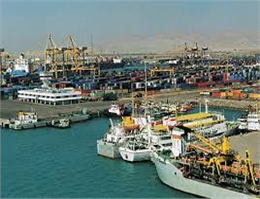 Stating that Shahid Bahoonar Port is an appropriate maritime terminal for transit goods to turkey, Russia, Azarbayjan, Kazakhstan, Turkmenistan and Iraq, Mohammad Mohseni remarked: possessing 12 Dock Posts, access to the international free waters, being located at the vicinity of Persian Gulf countries, connection to North-South corridor through international road network and appropriate draft for docking different ships has turned Shahid Bahoonar Port into as a strategic and important commercial base.
This official figure referred to the performance of container transit in the quarter of this year in Shahid Bahoonar Port and added: in the mentioned period,482.675 tons of petroleum and non-petroleum goods have been embarked and disembarked in this port.
According to Mohseni, chemical petroleum, mineral material, tar, fruit, ironware and building material are among export goods from Shahid Bahoonar Port to Persian Gulf countries and India Ocean Countries.
Pointing out to the embarkation and disembarkation operation of 220TEU container since the beginning April 2016, The director of Shahid Bahoonar Port and Maritime Organization stated: in the last three months,566 vessels have been docked at this port, which this figure highlights a 117-percent rise compare to the similar period in the last year.
0
Visit Home
Send to friends
Print
Newsletter
Share this news