The US Port of Boston welcomed its largest ever cargo ship on Sunday, July 17, when the 8,530 TEU container ship Xin Mei Zhou docked at the Conley Terminal as part of the CKYHE Alliance’s recently upgraded Asia – US East Coast service, the Massachusetts Port Authority reports. 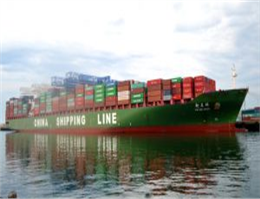 According to MANA,Following the opening of the expanded Panama Canal on June 26, COSCOCS and its partners in the CKYHE Alliance announced deployment of 8,500 TEU sized vessels on the Asia to East Coast route. Shipping lines continue to indicate their intention to deploy vessels carrying 10,000 to 12,000 TEUs in the future, according to Massport.
Conley currently services ships that carry 4,000 to 6,000 TEUs, and the need for a new berth, landside improvements and harbor dredging are all being addressed by the Massachusetts Congressional delegation, the Commonwealth, Massport, and the US Army Corps of Engineers.
0
Visit Home
Send to friends
Print
Newsletter
Share this news