A cruise ship sank in the Amazon River after an explosion. Five of the Aqua Amazon’s crew are apparently missing and 13 crew members injured. There were no passengers onboard at the time. 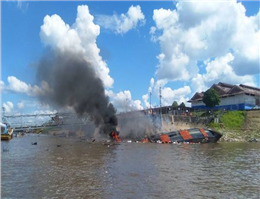 The vessel, operated by Aqua Expeditions, arrived to the port to fill the gas tank without any security measures when an accident occurred that caused an explosion and resulted in the sinking of the ship. The explosion reportedly blew a hole in the ship and it partially sank on its side
The company has issued a statement saying: “The cause of the incident is currently under investigation. All efforts are being made to get a better understanding of the status of the missing crew.”
The 130-foot-long Aqua Amazon was built in 2007 and is designed to transport 24 passengers and 17 crew. It was refurbished in 2013.
Another fire-related incident occurred earlier this year on the Amazon River. Two passengers died earlier after a cabin fire on an International Expeditions ship.
0
Tags: Amazon River cruise fire sink
Visit Home
Send to friends
Print
Newsletter
Share this news