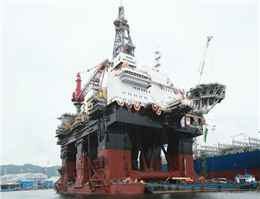 According to MANA,Ocean GreatWhite, measuring 123 meters (402 feet) in length and 78 meters (255 feet) in width, is capable of operating in waters up to three kilometers (10,000 feet) deep and drilling down to a depth of 10 kilometers (6.6 miles) from the sea surface. It has an operating draft of 23 meters (77 feet) and a transit speed of about eight knots.
The rig will be chartered to BP for operation in the Great Australian Bight from October this year.
Diamond Offshore has a fleet of 30 drilling rigs, consists of 21 semi-submersibles, four dynamically positioned drillships and five jack-ups.
HHI won the order worth $630 million to build the Ocean GreatWhite in 2013 and has delivered four other drillships to the US-based drilling contractor so far. The delivery installment worth 460 billion won ($395 million) HHI received from the client will help improve HHI’s cash flow.
Korea's top three shipbuilders, HHI, Daewoo Shipbuilding and Marine Engineering and Samsung Heavy Industries, lost more than $7 billion between them last year and have secured few orders in 2016.
0
Visit Home
Send to friends
Print
Newsletter
Share this news