ISTANBUL, July 16 Maritime authorities shut Istanbul's Bosphorus Strait to transiting tankers on Saturday "for security and safety" reasons, shipping agent GAC said, after what the government said was an attempted coup by a faction in the military. 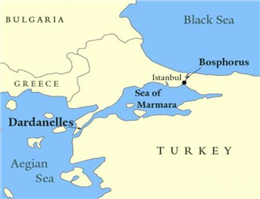 According to MANA, Bosphorus is one of world's most important chokepoints for the maritime transit of oil with over three percent of global supply - mainly from Russia and the Caspian Sea - passing through the 17-mile waterway that connects the Black Sea to the Mediterranean. It also ships vast amounts of grains from Russia and Kazakhstan to world markets.
On Saturday, forces loyal to the Turkish government fought to crush the remnants of a military coup attempt, following violence and clashes in Ankara and Istanbul.
Shipping agent GAC said some cargo carriers such as bulkers were still being allowed to travel through the Bosphorus which divides Istanbul into European and Asian sides.
A Reuters witness reported seeing no traffic at the southern mouth of the strait at daybreak.
Several Russian oil trading sources said they had not yet received notifications from shipping agents regarding traffic disruptions.
A spokesman for Russia's pipeline monopoly Transneft said the main Black Sea port of Novorossiisk was operating normally and had enough tankers near the port to continue loading operations uninterrupted until July 25 regardless of what happens in the Bosphorus.
Turkey is also shipping significant volumes of oil from the Caspian Sea region and countries such as Azerbaijan and Kazakhstan via its territory directly to its export terminals on the Mediterranean like the port of Ceyhan bypassing Bosphorus.
A BP-led group operating oil and gas pipelines running from Azerbaijan to Turkey via Georgia said there have been no disruptions to shipments.
"As of this morning, there were no disruptions, both pipelines are working normally," BP-Georgia said.
A source at Azeri state energy company SOCAR also told Reuters oil shipping to Ceyhan was uninterrupted.
Iranian Mehr news agency said Iran had temporarily stopped exports of petrochemical products to Turkey due to border closure between the two countries.
Oil shipments through the Turkish Straits has decreased over the past decade as Russia shifted flows towards the Baltic ports. The Baltic ports currently operate well below capacity, which means Russia could divert flows away from the Black Sea in case of prolonged disruptions.
Only half a mile wide at the narrowest point, the Turkish Straits are among the world's most difficult waterways.
0
Visit Home
Send to friends
Print
Newsletter
Share this news