Welcoming the proposal for tourism collaboration between Iran –Italy, the head of Italian tourism delegation stated: the necessary negotiations with Italian active companies in maritime tourism sector will be made regarding the launching of Passenger-Line between Italy-Russia-Iran in the upcoming days. 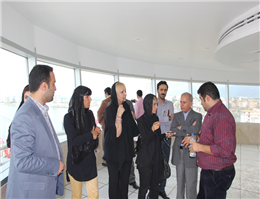 In the visit of Italian tourism delegation from different parts of Noshahr Port Special Economic Zone, the director of Mazandaran Province Ports and Maritime Organization submitted a report on the potential capabilities and capacities of Noshahr Port Special Economic Zone and expressed that this organization is fully prepared for expanding collaboration with Italy particularly in the establishment of maritime tourism tours, MANA reported.
Based on this report, the head of Italian tourism delegation paid a visit to the maritime museum and Control Bridge from upclose and was briefed on the maritime facilities and equipment in Noshahr Port.
He hoped that both countries could make the best out of existing capacities for expanding mutual collaboration.
It is noteworthy that a 50-member Italia delegation from the managers of 43 productive, economic, tourism and commercial companies paid a visit to different cities of Mazandaran Province as well as are going to investigate the necessary grounds for enhancing mutual collaboration with this province’s official figures.
0
Visit Home
Send to friends
Print
Newsletter
Share this news