A group of workers of Samsung Heavy Industries (SHI), the South Korean shipbuilder, staged a sit-in protest in Seoul today over the company’s restructuring plans that include massive layoffs, Yonhap News Agency reports. 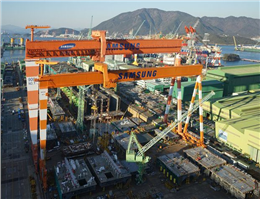 The protest was organized after a majority of the company’s workers voted for a strike and launched a four-hour protest in Geoje, South Gyeongsang Province last week, MANA correspondent reported.
SHI’s workers are opposing the shipbuilder’s self-rescue plan, which calls for 1,500 early retirements by the end of the year and requires the executives to return around 30 percent of their salaries as of this July.
The company’s USD 1.3 billion plan could be finalized this week as its creditor the Korea Development Bank (KDB) is reportedly scheduled to conclude SHI’s plan during this week.
In addition, the unions of South Korea’s eight shipyards are planning to stage a mass strike over the ongoing restructuring efforts, shipbuilding industry unions’ coalition was cited by Korea Herald.
0
Tags: site-in protest Strike south korea Samsung Shipyard
Visit Home
Send to friends
Print
Newsletter
Share this news