Islamic Republic of Iran's Shipping Line (IRISL) director and board chairman sat with the C.E.O. of the Belgian Antwerp Port at the IRISL headquarters in Tehran. 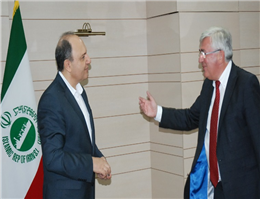 In this meeting, MANA reported, Dr. Mohammad Saeedi, IRISL director, asserted that Iran and Belgium are enjoying close and productive ties after the lifting of the sanctions and with the emergence of a new post-JCPOA, Dr. Saeedi added, Iran intends to expand its commercial relationships with Euro-Zone countries in the near future. Currently, Saeedi further stated, IRISL fleet is frequently traveling to various European ports, including Antwerp Port.
Emphasizing that banking deterrents still shadow Iran and Europe's economic relationship, Dr. Saeedi clarified that currently, there are no restrictions on the expansion of Iran-Europe trades, particularly in case of exporting petrochemical products and general cargos to European suppliers; yet, the only matter to be attended to and handled is eliminating banking deterrents and facilitating banking relationships.
Dr. Saeedi hoped that banking issues are settled and resolved by the European Commission as soon as feasible.
Later in this meeting, IRISL director deemed the Belgian Port of Antwerp as a major transportation center and the core port of Europe, and stated that IRISL would warmly welcome any increase in the amount of service it receives from this port. considering the new aspects and various fields of mutual collaborations between Iran and Europe, he calls for further and tighter relationship between IRISL and Antwerp Port, and hopes these ties get more subtle soon.
Further in this meeting, Eddy Bruyninckx, the C.E.O. of Antwerp Port stated that Iran and Belgium have had good economic ties in the past years, and added that his country was interested in pursuing and expanding its commercial ties with Iran, given the lifting of the sanctions and emergence of a new atmosphere. He confirmed that his organization would do their part in eliminating banking sanctions and turning transaction conditions to their normal state.
Bruyninckx also added that Islamic Republic of Iran and Europe have great potential to expand their economic collaborations and hoped that IRI and Europe' commercial, economic and banking ties get promoted in the upcoming future.
Expressing his interest in establishing a joint venture with the IRISL as well as offering better services to this shipping line, Bruyninckx added that exchanging more information would further ease and facilitate economic ties between the two nations; hence Antwerp Port authorities and executives are looking into different means via which the collaboration opportunities between this port and IRISL are increased.
At the end of this meeting, the C.E.O. of Antwerp Port invited the director and other high-ranking executives of IRISL to pay an official visit to this port and pave the way for further collaborations between the port and the Iranian shipping line.