Submitting a report on the performance of Lengeh port in the first three month of the current year, The director of ports and maritime organization of Lengeh port announced that western ports of Hormozgan Province have witnessed the growth in exporting Non-petroleum goods. 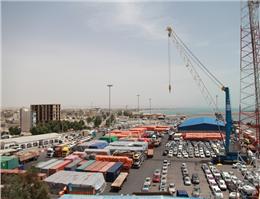 The director of ports and maritime organization of Lengeh port also pointed out to the 26-percent increase in cabotage of Non-petroleum goods in the mentioned period.
Moreover,Sabari announced that in the first three months of this year, this port has seen a 69- percent rise in the container operation sector compared to the same period in the last year.

On the one hand, owing to enjoying a good geographical and transit position, Lengeh port has turned into a top logistic terminal for Iranian Islands surrounding Persian Gulf region and on the other hand, being located at the shortest distance from United Arabic Emirates has made this port distinctive from other ports both in terms of cutting-cost and reducing depreciation of ships.