The construction works on the Prelude floating liquefied natural gas (FLNG) project resumed immediately after a small fire which occurred at the site in South Korea, where the vessel is being built, Reuters cited the oil and gas giant Shell. 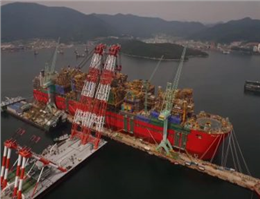 According to MANA, The fire was reportedly a result of an incident at the site in Samsung Heavy Industries’ Geoje shipyard.
The incident did not impact the delivery date, Reuters added.
Relevant authorities launched an investigation into the cause of the fire.
World Maritime News contacted Shell for details on the matter, but the company is yet to reply.
Shell Prelude FLNG platform, the world’s largest offshore facility ever constructed, will be towed over 3,000 nautical miles from Geoje to Australia once constructed.
There, the 488 metres long and 74 metres wide FLNG facility will be positioned before it begins production at the Prelude gas field in the Browse LNG Basin, 200km off the northwest coast.
The Shell Prelude FLNG facility features a fully loaded displacement capacity of about 600,000 tons, and has around 260,000 tonnes of steel in the facility alone.
0
Tags: Samsung Shipyard shell fire FLNG
Visit Home
Send to friends
Print
Newsletter
Share this news