Khoramshahr’s representative in Islamic Consultative Assembly stated:currently,the biggest operational port in the vicinity of Al Faw port is being constructed by Iraqi government. 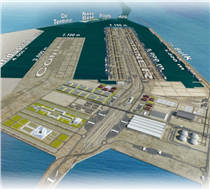 In an interview with MANA reporter, Abdollah Samari remarked: with the cooperation of foreign corporations, the construction process is progressing at a rapid pace, he continued: with the completion of this port, our dependency on Basrah ,Abu Al-Khaseeb and Abu Flous Ports will be reduced .
He added: with the construction of this Iraqi port ,we would be witnessing some changes in the volume of transportation of goods and commercial exchanges among the countries of the region.
Khoramshahr’s representative in Islamic Consultative Assembly continued: Iraq enjoys the  least amount of access to coast and international water, hence, its ports are facing with problems and limitations for docking big vessels.
Samari asserted: in terms of technically, Islamic Republic of Iran is able to conduct dredging operation in Arvand’s international waterway but according to 1975 Algiers Agreement, dredging operation of this international waterway should be done jointly..
He proposed : in case dredging operation be conducted in Arvand’s international waterway, not only we would be witnessing an economic boom in Khoramshahr and Abadan ports but also 25000-tons vessels will be able to dock at these ports.
Pointing out that dredging issue has been emphasized by the Iraq government several times, he added, it has not been acted upon so far.