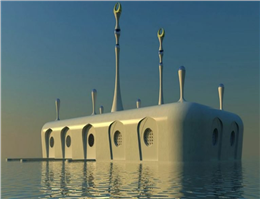 UAS is going to construct a floating mosque on water for fishermen and individuals who work in Persian Gulf, MANA reported.
The designer of this mosque is a Dutch engineer and artist, and he has submitted the early draft of the design to Emirates' General Authority of Islamic Affairs and Endowments earlier this year.
This general authority has asserted its agreement with the construction of this mosque, and its construction process will start soon.
The material used in the construction of this mosque is the same as that of boats and ships, and it has an open roof. The electrical energy and the lighting system of this mosque, also, would be supplied by solar energy.
0
Visit Home
Send to friends
Print
Newsletter
Share this news