HANJIN Shipping is planning to return a total of 38 chartered vessels once their contracts end as part of its restructuring efforts. 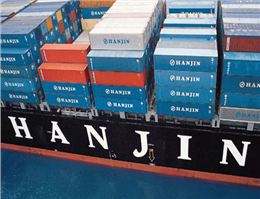 According to MANA,A company official said Hanjin was planning to return 20 containerships and 18 bulk vessels by 2017, but declined to disclose details.
As of April 2016, Hanjin had 100 container vessels in its fleet, 37 of which were owned and 63 on charter. The South Korean carrier had 151 bulkers, 91 of which were on charter while 60 were company owned.
Hanjin Shipping is also looking to refinance its Long Beach Container Terminal. The company official said: "We are reviewing the refinancing of Long Beach Container Terminal which has to be discussed with creditor banks, hence, we do not have a schedule yet."
Long Beach Container Terminal (Pier T) has the capacity to handle more than 3m teu annually. Its mile-long wharf is capable of accommodating vessels of more 10,000 teu capacity, Hanjin Shipping said in its website.
Hanjin Shipping on Friday said it was planning to raise about $18m through the disposal of stakes in three affiliated companies in China.
Hanjin Shipping started to renegotiate its charter rates in early May as part of its restructuring efforts. One of the shipowners, New York-listed Seaspan, has refused to accept rate cuts for a series of 10,000 teu vessels it has on charter to the Korean carrier.
The charter rate adjustment is among the three conditions of the voluntary restructuring agreement entered by Hanjin Shipping with its creditors. The two others include deferment of debt payments and the inclusion of the carrier in a shipping alliance.
In May, bondholders agreed to extend the maturity of Won35.8bn in debts by four months to September 23 this year while the Korean shipping line, along with NYK, Hapag-Lloyd, K Line, Mitsui OSK Line and Yang Ming Marine formed The Alliance, a new vessel-sharing agreement covering the east-west trade lanes.
0
Visit Home
Send to friends
Print
Newsletter
Share this news