Caspian Sea is Our Top Priority 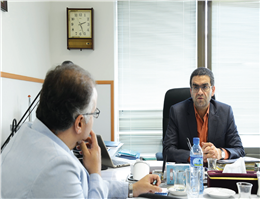 As the largest body of water in the world, the Caspian Sea has the potential to play a great role in maritime transportation. Even though the economic development of its surrounding countries in the past 25 years has undergone striking rise and fall in the light of the collapse of the Soviet Union, it seems that the economic necessities of the region has brought these nations closer together; better put, the collaboration among the Caspian Sea neighbors is getting more and more colorful in the hope that someday, the Caspian Sea could finally play its share in the region’s economy.

Lifting sanctions on Iran and imposing new sanctions on Russia closed one door and opened another; and made the shipping in this region more important than ever. Meanwhile, Islamic Republic of Iran Shipping Line (IRISL), which has been actively present in the Caspian Sea since the decommissioning of the Soviet Union, is attempting to turn into a key player in the Caspian Sea transportation, and facilitate the trade in this region.

Ali Akbar Ghonji, the director of Khazar Shipping and the Chief of the Staff to the IRISL director has answered our questions in this regard:

Owing to its geographical and geopolitical nature, the Caspian Sea is always in need of full collaboration among all its surrounding and beneficiary countries. How do you evaluate the status of this collaboration currently? Is there full multifaceted collaboration going on among these countries at the moment?

The majority of the countries surrounding the Caspian Sea are former Commonwealth of Independent States, and even though over 3 decades has passed since USSR was decommissioned, these independent states still stage some traces of USSR behavior. Of course, these countries opted for free economic policies immediately after their independence, yet centralization has remained in its general governing policies. In addition, the tendency toward Russia as the main part and the main leader of the USSR has still strongly stayed among them, in a way that CIS economic-political union has been established among them since 1990 in order to preserve their collaboration and benefits. In liberating their economy and opening their trade doors to the world, these countries take far more precautions than countries like China or other newly-emerging economies. It seems that security issues are still a priority for them just like it used to be in USSR. Therefore, they have always been concerned about mutual collaborations and the processes of collaboration always goes ahead far more slowly with them than with other countries. Basically, some of the rules and regulations (e.g. customs rules) have still remained in these countries from the communism era, and they are still practiced widely in these CIS states.

Which rules have remained the same since the decommissioning of the Soviet Union?

As far as transit of goods to Russia is concerned, Astrakhan Port in Russia has many terminals for the embarkation and disembarkation of goods, and ships have to go to these terminals one by one to disembark their cargo. In other words, the whole cargo of a ship is not disembarked fully once, and hence they cannot be consolidated on the deck. In fact, the standards in former Soviet Union republics are local standards and exclusive to them, which are far from the international standards. These factors make it more difficult to us to collaborate with them compared to other countries. Besides, Iran’s interactions with its northern neighbors have always had ups and downs in the course of history. I should also add that our communications and travels to the west and our long-term relationships with western countries have given us Iranians some sort of implicit fear from the Commonwealth of Independent States (CIS). I believe this fear is not a realistic one, and it will fade away provided we establish communications and collaborations with them.

Which measures have been taken regarding the removing of these problems?

The General Governors of Iran Northern Provinces and also the managers of Iranian corporations have established a good relationship with their counterparts in the Caspian Sea Region. But to facilitate the commercial transactions, these relationships should be stronger. For instance, in spite of that we are well aware that Russia owing to experiencing a lot of political problems in the region is in need of our fruit products, the export process to this country is facing some obstacles, while the process of export to other Persian Gulf countries is taking place at a rapid pace.

What plans doses IRISL have in mind to facilitate its activities in the Caspian Sea?

Since the past two decades, the Caspian Sea has been the high priority for the management of Islamic Republic of Iran Shipping Lines (IRISL). the establishment of Khazar Sea Shipping could be regarded as a good example in this regard. It is a fortunate; this company has experienced a remarkable growth in its activities during the past years. Moreover the presence of Khazar Sea Shipping in Russian Ports and making plans for investments in these ports are among the significant activities of this company to facilitate and develop its performance in the Caspian Sea. Our railroad and ports can be at the service of CIS countries so as to transfer the cargos to or from free waters. In fact, considering Russia with the imposed sanctions against it, CIS countries in east of the Caspian Sea have problems transporting their commodities to Europe and without any doubt the problem can be solved through Iranian railroad and ports.

Is there any action accomplished in this case?

IRISL recently signed an MoU with Kazakhstan national railroad company in the presence of presidents form both countries. The MoU is in fact the initial step to expand collaboration in this realm.

According to the MoU, a joint venture company will be established to operate in Aktau and Inche Borun Ports in Kazakhstan along with Anzali port and Bandar Abbas in north and south of Iran. The action indicates that IRISL lays emphasis on expanding the trade with CIS countries. We intend to pave the way for exporting the products from CIS countries to any destination and importing any required product from South Asia and Indian sub-continent and even Europe to the region and set up mutual cooperation.

One of the major IRISL plans is cross trading in the Caspian Sea in a way to commerce in east-west and north-south routes. Supplying Turkmenistan market through IRISL multi-modal transportation is of great importance. To accomplish this, an MoU was signed between the state rail roads of the countries Azerbaijan, Iran, Georgia, Kazakhstan, Turkmenistan, and Ukraine. The MoU is planned to expand the trade and supply the demands in Caspian Sea states and Ukraine and connect Ukraine to Turkmenistan and consequently fill the trade gaps in the absence of Russia.

How ready is IRISL to accomplish the articles in the MoU?

IRISL is entirely ready to stage the plan. IRISL South fleet and the multi-modal transportation company as the subsidiary of IRISL are in good shape to materialize the paln.in other word, we are ready hardware -wise. However, the software section moves forward at a slower space and I think there is no reason for such a delay especially after sanctions removals. Nonetheless, we are optimistic about the joint venture company I mentioned earlier and suppose the company should speed up the trend and remove the delay.

I hasten to add that there is a competition between the Caspian Sea states for the CIS region and recently Pakistan and Afghanistan also joined the competition and are planning new routes to the region. However, entrance of India to Chabahar port accelerates the accomplishment of IRISL plan and we hope to supply the market in this region with proper speed and quality as well.

What is your perspective of IRISL to turn out to be the most important hub for transit and transship in the region?

We are highly optimistic in this case and IRISL team has activated fully its potentials to move forward with the project.

I can strongly claim that it was us who reminded domestic and foreign authorities of the importance of the route and the related market in CIS. The main agreement in this case was signed between the two important countries in this case, Iran and Kazakhstan, and this demonstrates the importance of the case and is considered a message to the authorities to take active steps as soon as possible.

IRISL recently announced to become involved in oil issues in the Caspian Sea. Is this a new policy in IRISL? What are the major plans to follow the policy?

Khazar Shipping Company as one of the subsidiaries of IRISL aims to mount its share form 35% to 50 % in the next two years. To work on oil issues is a one of our short-term targets. The plan to increase Khazar shipping company’s asset was recently ratified and consequently we aim to go through fleet expansion and renovation along with increase in port operation.

We need to surpass the railroad options in east of the Caspian Sea through creating merits in the company and the plans we offer.